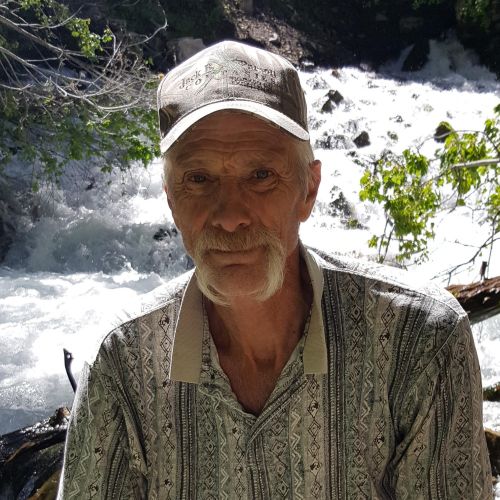 Ron Thomas passed away in the arms of his wife, Brenda Ruth Thomas, on Saturday January 19th, 2019. He was also surrounded by family and loved ones as he was called home to be with Heavenly Father.

Ron was born in Soda Springs, Idaho to John Junior and Iona Ashbaker Thomas on March 2,  1954. He grew up on a farm and learned the meaning of hard work, responsibility, ethics, and the love of the outdoors. He graduated from Grace High School, and Wyotech Technical Collage in Laramie,  Wyoming.

He moved to California with his wife, Lucy, and daughter, Kayla in 1983. He worked for Ned Clyde Construction as Vice President of Operations.  After a divorce, Ron returned to Grace, Idaho to care for his parents. He also worked for the city of Preston School District remodeling the local schools.

Ron and Brenda were introduced on a golf course, one of his favorite pastimes. They quickly created their own style and laughed throughout every game they played. They married in 2011, moving to Stagecoach, Nevada where their love of horses resulted in  a remote horse ranch. With Ron's talent for construction, remodeling, and woodworking  the ranch became an oasis in the desert.

In 2015, Ron and Brenda moved to Preston Idaho to enjoy more time with Ron's family and experience a new environment of outdoor adventures. There, they made many friends and enjoyed the love of all the neighborhood children. His grandchildren gave him the name of Mr. Roger's when they misunderstood Mr. Ron, and it stuck. All children have since called him Mr. Rogers.

Ron's love of the outdoors, traveling, and exploring new places took he and Brenda on several wonderful road trips. Many great memories, a lot of laughter, and getting lost was abundant. Ron was a tall, quiet, cowboy whose humor, devotion, love, and  gentle manner will be missed by many. He was referred to as Mr. Man, or My Tall Drink of Water by his wife Brenda.

Services will be held on Saturday January 26th at the Church of Jesus Christ of Latter Day Saints, 213 South 2nd East, Preston. A viewing will be held Friday January 25th from 6-8 PM, and again Saturday morning from 9:30 to 10:30 with services at 11:00.

Graveside services and interment will be conducted at the Turner Cemetery in Grace Idaho  at 3 p.m. Saturday.

The family requests in lieu of flowers, donations to Huntsman Cancer Institute, Salt Lake City, Utah, in Ron's name would be appreciated.

Please share a favorite memory of Ron or offer condolences to the family by leaving a tribute on this page.

Services for Ronald haven't been added yet. Sign up below to be notified when the services are updated.